An Open Letter To The BBC

By Qiyas Huseyn October 5, 2020 No Comments
We would like to express our deepest concerns regarding the articles BBC has shared recently;
the articles that appear to be misinformation about the ongoing military conflict in Karabakh.
We are particularly concerned about the articles titled: 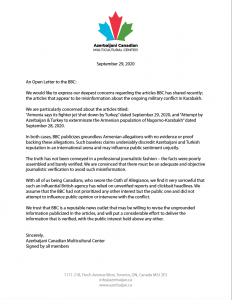 In both cases, BBC publicizes groundless Armenian allegations with no evidence or proof backing these allegations. Such baseless claims undeniably discredit Azerbaijani and Turkish reputation in an international arena and may influence public sentiment unjustly.
The truth has not been conveyed in a professional journalistic fashion – the facts were poorly assembled and barely verified. We are convinced that there must be an adequate and objective journalistic verification to avoid such misinformation.
With all of us being Canadians, who swore the Oath of Allegiance, we find it very sorrowful that such an influential British agency has relied on unverified reports and clickbait headlines. We assume that the BBC had not prioritized any other interest but the public one and did not attempt to influence public opinion or intervene with the conflict.
We trust that BBC is a reputable news outlet that may be willing to revise the ungrounded information publicized in the articles, and will put a considerable effort to deliver the information that is verified, with the public interest held above any other.
Sincerely,
Members of Azerbaijani Canadian Multicultural Center
Share Tweet Share Pin